Half Lord of the Fishes – Ardha Matsyendrasana

Brief spotlight on Ardha Matsyendrasana (half lord of the fishes pose) 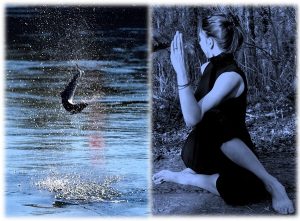 Non-human animal:
It is arguably an example of an animal posture that doesn’t immediately (if at all!?) reflect the appearance of the actual animal form. Although, if you think of the twisting and undulating movements of fish, the animal form can be great inspiration for exploring a wholesome twist in our own animal body. The aesthetic of this posture also connects to the mythology of this posture (see below). Depicted here is the renown salmon jumping high and twisting extensively, which they are known for doing particularly to navigate waterfalls and rapids in what’s known as the annual ‘salmon run’ as they make their journey to spawn at the tops of rivers. The twisted legs in this posture may represent the undulation of a fish’s tail; the upper body could represent a jumping or darting fish as we endeavour to sit tall…
It is a sobering thought when we ponder how an estimated three trillion fish are used by humans for food per year (mostly wild-caught but with ‘factory’ farmed fish becoming increasingly common)! This makes them the most used group of animals by humans. The myth remains that they do not feel pain despite science (and our intuition?) suggesting otherwise. Did you know fish get their omega 3s from algae and that humans can too? Find out more about algae oil.
Lots of course could be commented on about fabulous fishes, but these are just little tidbits and we can save further tidbits for the other fish postures 😊
gggg
Mythology/spirituality:
Hinduism shares with Christianity an image of an ever-expanding divine fish, symbolising ad infinitum (again and again forever). There is also a fish biting the tail of another fish, a variant of the ouroboros symbol. Oceans in Buddhism represent cycle of samsara and so fish represent fearlessness and happiness as they swim speedily through without drowning.
This animal posture is named after Matsyendranath who is considered the founder of hatha yoga. Legend has it that in one life form he was a fish (or at least inside a fish’s belly: we can remember this when exploring making ourselves small in this posture!) who became enlightened by merely listening to Shiva speak about enlightenment and forming the first student-guru relationship. This posture is therefore rumoured to be the very first animal posture! According to legend, Matsyendranath returned to Earth to helps others on their spiritual path and did so in the form of a fish-human hybrid! Some say the lower part of the body in this posture represents the fish part of the hybrid and the upper body the human part…
gggg
Asana:
This posture features in the Hatha Yoga Pradipika (a 15th century text on hatha yoga). This is one of three well established fish-named postures in yoga.
This animal pose is said to stimulate the naval centre, and to awaken dormant or stuck energy. The back muscles are guided in a different direction than normal resulting in an easing of tension. This animal pose is said to awaken the Manipura chakra (solar plexus). It stretches the piriformis muscle. It helps to gain some momentum if you push into the floor with the sole of the foot.
NB: the images neither portray the posture in its fullest nor simplest expression.
gggg
Modifications:
If it feels a struggle and too much to place the elbow on the outside of the knee to help with the twist, just hug the knee towards you as you turn as much as your body wishes to go. The bottom leg can be stretched out if this helps. You could simplify the twist further by twisting from a crossed-leg position or in a chair. Visualizing this animal posture from a supine (laying) or sitting position is also always an option. To deepen the twist, you can explore binding the hands together.
gggg 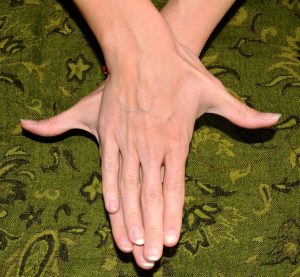