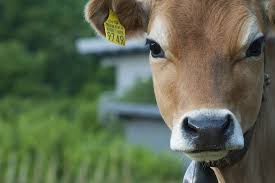 Reconciling the transition away from dairy with yogic philosophy

Today is the first ever World Plant Milk Day. The personal and societal reasons for transitioning away from dairy (and other products derived from animals) and towards plant-based alternatives span the environment, animal welfare and human health across the globe. The benefits posed by plant-based diets are detailed clearly by the new international food awareness organisation ProVeg.

Vegetarianism is often hailed by Yogic scholars as the diet most affiliated to a yogic path in terms of ethics, personal health and yogic tradition. But what about veganism? One does not have to dig very deeply before coming across a myriad of symbolism within yogic philosophy connected to viewing the cow as a milk-giving mother. Milk is also used within ceremonies and rituals as it is considered as a sacred substance. So, how can transitioning away from milk live in harmony with a yogic path?

There are numerous ways in which yogic philosophy could not only support a societal transition towards veganism, but also contribute to fostering leaders and influencers of such shifts in society:

The eradication of the role of cattle in human advancement in our history does not need to occur. Shifting to plant-based diets does not challenge the notion of the cow as a mother to our ancestors; we can continue to honour this and express our gratitude. The time has come that the cow needs the human as a caring protecting mother. This video explores how one Hindu family honours their Gods using plant-based milk instead of cows’ milk (not to suggest that yoga is religious but it is widely considered to be a tool stemming from Hindu culture). Transitioning away from dairy could simply become another societal progression, similar to how many regions have outlawed animal sacrifices for ethical reasons, despite the long-standing traditions and cultural significance of such practices. Considering that humans can thrive just as well if not better on a plant-based diet, why are animal sacrifices not OK but the mass production and slaughter of billions of animals needlessly each year for food OK?

Modern milk production is a far cry from milk production methods in ancient times. Vegetarianism and veganism, sometimes hailed as western developments, have also actually historically been practiced in the birthplace of yoga since ancient times, particularly amongst Jains. The yamas and niyamas support the transition away from dairy. Every yama and niyama can be applied to the entirety of the animal kingdom, not just the homo sapien species. Shambo’s devastating story highlights a genuine full attempted enactment of the yamas and niyamas. Look at the lengths this community went to, to protect one cow. Why such effort for one individual cow but the exploitation and destruction of billions of other sentient beings each year (this is not a question for the community itself but rather for all of us, as chances are, we all wanted Shambo to live)?

Two things should be noted. First, yogic philosophy is much clearer regarding the abstinence from egg consumption. Lacto-vegetarianism already lies within the culture as eggs are considered to be the beginning of life. However, even if this were not the case, similar arguments could be made due to grave suffering and disrespect for life within the egg industry. Second, the situation may be more complex and sensitive in some areas of the world, but generally speaking these are the exceptions; many people and societies can make a clear choice whether to breed, rear, slaughter and sell animals for their meat or other products. There are initiatives such as Ahimsa Milk where the male calves are not killed (but put to work) and where the mother is not separated from the calf. Such practices are definitely an improvement; however, everyone would still need to dramatically reduce their dairy intake for these hugely low-key initiatives to provide for everyone, if such levels of provision could at all be possible. Ethical concerns would still remain as well concerning using the animals and their secretions in any way at all.

Yoga is not about remaining attached to traditions merely for the sake of tradition or due to its hold on our socially constructed identity. It is not about the denial of problems or leaving them for others to sort out when we play such a fundamental role both in the problem and the solution. Yogic philosophy need not be an obstacle to veganism. On the contrary, yogic philosophy and supporting a societal transition away from dairy can live in perfect harmony. And leaders of such social change could stem from within the yoga community. As members of the higher consciousness community, arguably, we need to be the leaders; we have a responsibility to step into this role as people look to us for guidance, inspiration and hope. Can we truly practice sitting in integrity, peace, contentment and stillness without recognising the atrocities within animal agriculture and without, at least, playing our part in the transition to the alternative? Start now (or continue!) on World Plant Milk Day.